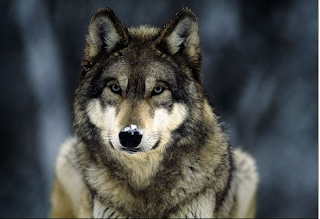 Because most of the time in the cabin there were at least 2 if not 3 of the wolves, usually because Big Old Guy was there, and he had taken a fancy to one of the females, or a rank young male was injured trying to climb up the ladder, or they'd found yet another, wounded or hurt, or just too weak to be outside.
Posted by . at 8:40 PM No comments: Links to this post 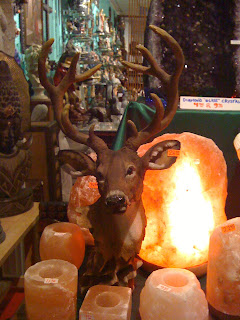 The other night in the city of Kingston the only other people on the same block were drunk coming out of the pub. A man insisted I should come out of the cold and at least get a hot cider. He was making a big deal about the cider. I said, "What's the big deal about the cider?" Asked this of a perfect stranger. He was unphased. "It's so good," he said. "You never know — you might like it." He seemed to be trying to wink at me.

I was dressed in double hats, double jackets, insulated boots, holding the dog toy. The dog toy would be given to the dog when she found me in the dark, in this mostly empty city. Because I was out there, waiting for a trailing dog to find me during an urban trail. "Well who are you waiting for, then" he wanted to know. I didn't want to tell him I was waiting for a dog. And I'd forgotten, really, what it meant to be considered a possibility. So I thanked him.

On the way back to the truck after everything, I saw the deer in the window. Further proof of the shorthand darling heart of faith in the odd world. For you.
Posted by . at 8:35 PM No comments: Links to this post