Vintage sometimes presents enough of a hint of its original purpose to contradict assumptions; to steer you away from easy conclusions. Or, simply, I am ignorant. So it was with this, and so it was with me. 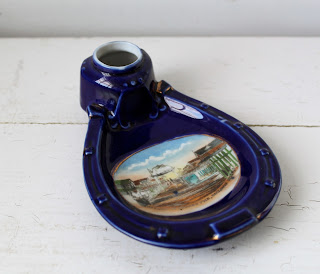 I found it while going through a box of castoffs at a thrift shop. It's part of the whole vintage discovery process; first, the shop; then, its threshold: hazy with the dust of old videocassettes evaporating into the stale air; sometimes a radio warbling from overhead; sleepy clerks; that strange gray overcast under the dim charity bulbs. Then, the mining begins. For some reason, I was in a box mood. There was a box, by the LPs that were in their own box. When 27, I would have dug into that LP box as if I were the first to discover Pet Sounds on vinyl. That was so then.

This box was marked Misc. Misc. in vintage can mean a lot of things, but it mostly means mystery. Promise. Miscstery. Promisce. In this box, at first, were just discards: cards of discount earring studs, a cloth purse with a rotten corner, a pleather purse riddled with adhesive gunk, a sneaker (a sneaker with another s on the end is a useless object), rubber-banded jumbles of old pharmeceutical logo pens, unloved paperbacks with ragged ears, a cutoff Fame style sweat shirt and some pinned-together sweat socks that smelled of foot powder. Then, for some reason, I thought of my father, who often tucks fragile things like Leica lenses into his socks. And so I — fondled — the socks. Quietly. Discreetly. There is a fine line between vintage treasure hunter and hoarder of things like singular sneakers, I fear, and sometimes I wonder how easy it is to cross it. But sure enough, tucked into one of the socks was this. 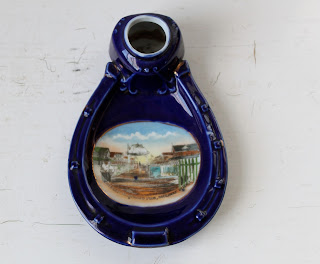 After the find, there is often the — feign. After you find what may be something amazing, you call upon the karmic treasure gods by not really focusing on it — as if somehow, by calling attention to it, you'll magically alter its price, or its something. So instead you avoid investigation. You gloss. You feign disinterest, lest someone notice you.

You deposit your object in the cart, or the basket, or the bag, as casually as you can, projecting disinterest, and you keep moving. I assumed I had just found a candlestick holder and satisfied enough, header for a fake leopardskin hat that turned out to be late 1990s awful. Hours later, got home. That's where you get to check the take. Do the take check.

I spread it all across the kitchen table (a yard sale find, 1950s chrome legs, flecked green and white formica top with a leaf pattern, heart be still). Put away the sweaters, the skirt, the dress, the coat, the cooking with cheese book. And I took a closer look at this candlestick. 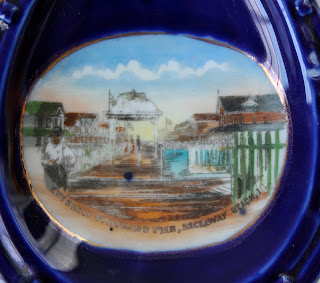 Blue speck on the scenic reprint: what's that? It looked like ink. A blot of ink. Scene reprint: it turned out to be Holland Pier, Rockaway Beach. But when? Gilding, cobalt glaze. Old. Man in hat and suspenders. Men don't stand around in hats and suspenders since a long time ago. There was a Boardwalk Empire on a Sunday afternoon look to it. I googled. Found these:


The first was clearly The Scene on the candlestick thing. The second seemed a bit newer, but was really taken, originally, from slightly further along the pier. The third had a white instead of a green fence. Still, more proof. I could almost hear the gulls, smell the salt, the water, hear the quiet that must have been then.

So it was old, this candlestick thing with the ink spot on the scene. And it was a souvenir from Rockaway Beach, back when Rockaway Beach was a real resort. And it has a horseshoe, a kind of lucky horseshoe, and I knew from some old file folder in the back left of my brain that back in the 19-oughts, resorts often sold souvenirs with things like lucky horseshoes on them. And they tended to serve 19-ought type of functions. And also back in those days, there were oil lamps and gas lights. Not too many candles. Someone trips on the edge of her nightgown, the candle lands on the lace curtains, and whoosh goes the pier. So this had to be something else.

It says Germany on the back. I stared at it for a few minutes. The dogs were sleeping, so I could think. I stuck a very standard sized candle in the hole of the well-type part. Candles, amazingly, according to a friend of mine who could be called a wax historian, have not changed that much. Already the idea of it holding a candle was a dimming possibility. And the candle didn't fit. And that blotch in the bowl.

Spot of ink. Horseshoe shape. I googled around and found this.

There's the search, the find, the feign, the take, the long think. And then the stumble, the google, the google some more, and finally, the i.d. Germany, it turned out, owned the market for blue porcelain souvenir inkwells with scenes on them. Imagine a guy in shirtsleeves held up with garters, penning his order for 100 porcelain horsehoe inkwells printed with the postcard enclosed, sincerely, Messr. Somebody whose brother posed for the picture in hat and suspenders. 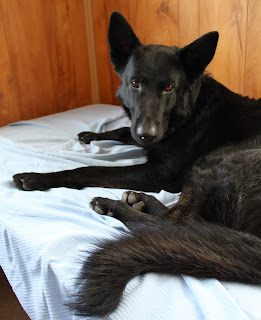 This is not an occasional thing.

Years ago I used to make sure to write celebratory writings on the occasion of a celebration of an occasion. In other words, back in the days when my head was clearer, before the fuzz began to lay along the meridians and frollocks of the brain and the world didn't quite seem so muddy. On the occasion of the new year, for instance, I'd write something resolutionary. Though even then, back when I had short hair, sometimes very short, and big eyes, sometimes very big, and sported a generally slightly bored look, I wasn't bored. I was consternated: our new year is not necessarily their new year and their new year is not those other people's new year and so is it really the demarcation of anything? 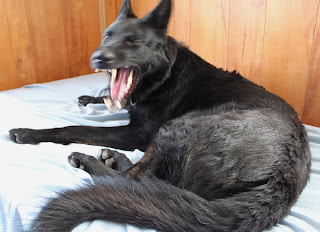 That was probably a sign of early onset. Meanwhile, the helliday tide of family joy and angst (— someone make me up a word mixing those two and I'll send you some pie. Joyangste? Pronounced the french way? Gives a dressiness to it. Jangst? Sounds Freudian. Jongst? Isn't that the name of a famous skier who wrapped himself around a tree in Gstaad? — ) has come and gone, and with it my marathon baking session that nearly melted our kitchen wall to death. Which was a very great thing. The net result of 4 cheesecakes, 7 batches of peanut butter cookies, 4 batches of chocolate chip, a killer batch of twice-baked shortbread, a whole herd of jelly kiss cookies and lots of satellite batches ungapatchka'd together from leftover sturm und drang is an accelerated Kitchen Renovation Plan. 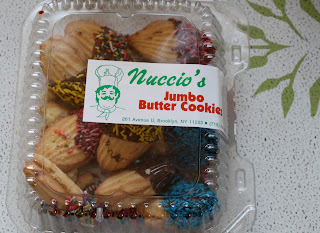 Apparently, and this is switching into confessional blaggage over here so forgive me or skip, I have been, um, yelling for a couple of years about the kitchen. I have no recollection of yelling. Maybe a goddamit the fiftieth-whazztheyeffith time my knife fell between the crack between the dingy 9th-hand tiny stove and the loose scrap of faux formica counter (color: burned marshmallow, from years of someone who apparently liked to flambé her toast), and I therefore had to fish it out using the handle of the swiffer, teasing a mound of old yam shavings and dog hair and vintage mysterianisms into the middle of the kitchen floor where, somewhere in their greasy midst, was the knife.

Maybe, sure, just a little, little curse when the linoleum backsplash absorbed the boiling over tomato-based sweet and sour chicken soup instead of deflected it. Maybe a tiny little noise when the cardboard box of teabags plummeted from the cabinet over the sink into the soaking soup pot, endowing some very fancy Japanese tea with an unwanted iridescent lavender-eucalyptus cast. Just a little squeak. 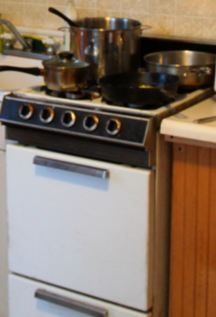 Worth mentioning, however, that the stove has tantrums. What come are strange spikes in temperature from the oven: bake at 325º can become char at 600º if you're not there to monitor, to cajole, to turn, to readjust. That may have had something to do with the melted wall. And since a marathon baking session is also like pulling triple shifts as a museum guard in the Picasso galleries when the psychotics had their field trip, I may have been a bit distracted from the whole wall thing. Which I did. And was. I was a guard at the Museum of Modern Art, and I did once chase a deranged man through the catacombs between the fake walls during the blockbuster Picasso show. 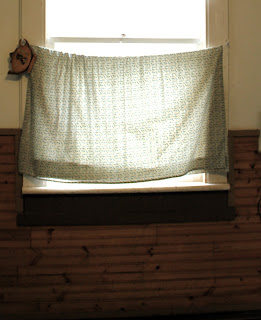 It's a good thing the wall finally melted. Melting walls speak so much louder than quietly unyelling cooks. But FYI in the spirit of the luncheonette we are not buying the veneer farm or the New New New this or the Shaker farmhouse look or the up-the-value-of-the-house thing. We are not going to spend thousands. I am hoping to keep the atomic-modern metal base cabinet underneath the 1940s sink, and the 1940s sink, and the 1950s'cabin pantry closet, though all are a little — scabby. But the horizontal beadboard trimmed with scraps, the warbled strips of wood paneling, the linoleum backmelt,  the 1970s vinyl faux stone floor tiles that shifted during the Big Melt (the ones around the stove sort of  skated around), are gone yesterday. There is retrofunctional and vintage workable and then there is junkyard dysfunctional. Stay tuned.
Posted by . at 12:43 PM 4 comments: Links to this post

Labels: AND THOSE OF YOU WHO KNOW ME CAN FIND THE TELLINGEST LINE, catskills, vintage
Newer Posts Older Posts Home
Subscribe to: Posts (Atom)