This week, like nearly all of them, has not gone as planned. The chicks are doing marvelously but the camera makes them panic, so pictures are forthcoming once they are more used to the giant black spectre of a digital SLR in their midst. The chicken coop has arrived, brought on a Ford F350 and a pneumatic hydraulic superflexible trailer, driven by a man wearing an FD hat and sweatshirt and ghillie-toed logger boots. And levi's. It made me think, the sight of those big macho boots (he had big feet) with the frou-frou, snaz-ola touch of the kiltie toe. A functional part of the boot's design with a purpose: to block embers, protect the upper from chafing from laces. But they look fancy, regardless. They do.
Why do people wear what they wear? Why do they pick what they pick? Which me straight to the revelation of the black and white cookie.

The point is, the black and white cookie is a flexible entity that can be savored and considered in many ways (Seinfeld, etc). 27 people might have one and noone will eat it the same way. And, incidentally, it started as a way to use up leftover cake dough — waste not in ye olden days. It is at least 108 years old: Glaser's, a famed old world bakery that happens to be in my sister's neighborhood, has been making them since the opened in 1902. Which makes it bona fide vintage.

And that fondant icing, made of simple ingredients, adds up to more than the sum of its parts. Like great outfits. Like a great piece of vintage, that emanates something far more than a piece of cloth with seams. We all know the phrase: a Peggy dress, 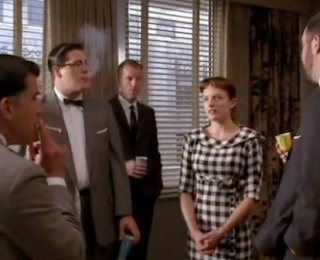 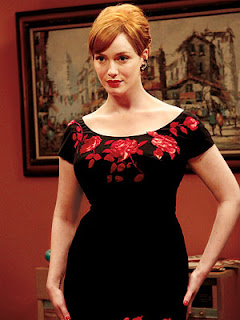 Means a world. Come to think of it, how many times do we see Joan in a black and white dress? Doesn't suit her. There's nothing really black and white on her surface, though there is,
I think, on the inside. Her curves have their own morality. 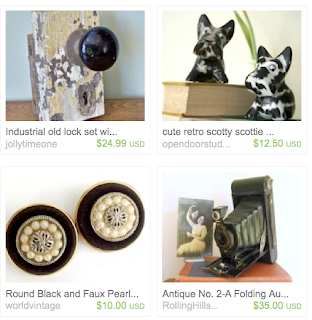 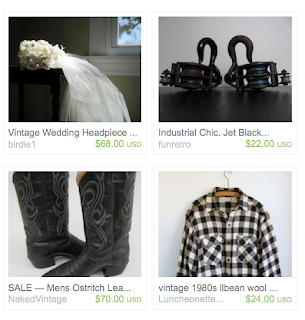 The thing about black and white cookies, which belong to the honored category of Food That is Vintage, is that they are stark and yet they are delicious. They are geometrically divided, they are round, and yet they have that warm, crumbly potential you can taste before you start eating. Vintage is that way, or can be. In black and white, it can look even more luscious. The forms come out, the lines, the retro, old-school, antique mechanics. You can nearly see the drafter's pencil at work, the giant shears at the tailor's. Cabinwindows is the etsy moniker for a biologist and anthropologist who made the treasury excerpted above. Black and white. She grew up watching biology filmstrips, lives in a haunted cabin, and she gets the black and white cookie of it all.
Posted by . at 7:22 PM 1 comment: