Containing a tangible sense of history

that seems woven right into the wool. A memory of a horse's flanks steaming on a winter's night. The creak of the carriage traces as the horse waits, the snow melting into the wool.

Another horse blanket at the Orange County fire museum, from the 1880s.

And then, jumping around, found an entry on the triangle shirtwaist factory fire: that firemen tried to catch the falling women with a horse blanket. With vintage comes the past.
Posted by . at 7:02 PM 1 comment:

Not all twee
The treasury that was on etsy's front page from 9 to 10 am had nary a blossom or a teacup or a whimsical fairy digi-card to be found. Nothing against blossoms or teacups. And here's the row that got left out of the FP. It includes more essentials: old photo, brush, fantastic collar, great ring. Worth clocking on for the terrific sellers represented, too. And confirms my endless affection for grey and midtone neutrals. 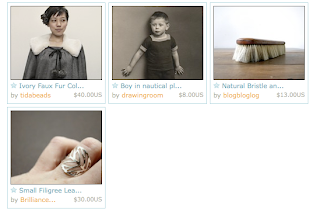 Curator: coolranchstudio. I'll say. Big piece of pie coming your way.
Posted by . at 10:42 AM 1 comment:

Labels: birds, catskills, chickens, happiness
Posted by . at 8:45 AM No comments:

There was a lot going on this weekend that had nothing to do with vintage. It was supposed to be that way. There was grocery shopping. There was writing. The landscape in my novel suddenly had to change. Or so I thought it should. I wanted to turn the bowl-shaped valley that the wolves live in into a hollow, or a clove, something that seemed more jagged and less tyrolean. That set off all sorts of revision-hell alarm bells. Consistency rebricked across all those pages could be the death knell, so after toying with it, I temporarily gave up.

There was work. I interviewed a haberdasher for an upcoming article. I love interviewing haberdashers. He said, "Men no longer want a big silhouette. They want that slender, throwback, lean and mean fit." He said, "Black is the new black."


And I had to finish editing a kind of magnificent, far-reaching text by someone who is clearly, and I say this with no irony, brilliant. And clearly, in a slightly wild-haired way that somehow reminds me of Colette, of his own mind. And I had to query him, in English, through a few intermediaries, and hope the answers would somehow sieve out of German and back into English in a way that I could then blend them, a la Smitten Kitchen, deftly back into the batter, so to speak. And it worked, in the end, into a smooth, kind of peppery mix.

As I write this I am sitting with a pair of old pumps on my lap that smell like stinky old shoes. I have been inhaling shoe stink somewhat unconsciously, until the last few moments, when it got — profound.

And just to the left of the laptop, towering behind the screen in a kind of tawdry jumble of type and color, is a stack of pulp mysteries and crime novels from the 1950s with names like Night at the Mocking Widow and Dardenelles Derelict. I'm going to sell them in the luncheonette for a friend. We had a blast going through the titles, the covers, the luridness of it all. And next to them is a stack of vintage cookbooks I am obsessed with, which have instructions like, place in a quick oven and bake, and be sure to save the drippings in a can for later: a thrifty kitchen is a practical kitchen!

The point is that a weekend that was supposed to be very much not about vintage became a weekend in which vintage held me in thrall, in all its enigmatic impossibility, its time warp, its fragility, its other-time-ness. It called to me as I worked, cooked, ran. It created conundrums and commotion. It busted a little hole through the real-time sky. 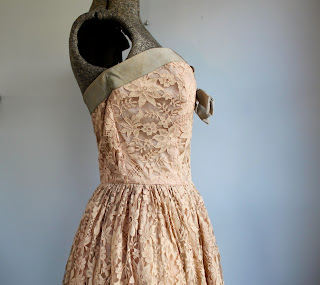 At a barn sale one town over, I found an old 1950s lace cocktail gown, strapless, with peach-colored lace so delicate it threatens to fall apart at a lady's exhale, and dove grey trim around the bodice that has an unsettlingly mottled look over one side. It is, of course, tiny, and yet the chest is made for someone on the Jane Russell side. And on Beulah it does nothing, just hangs there limp like it's about to play bass at a Hole show in 1996. 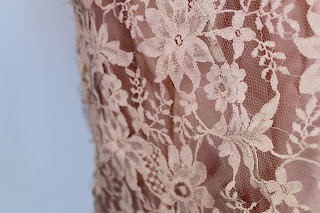 This is a beautiful dress, but it's beautiful more like bleached out Edward Gorey than like the hell-cat curvaliciousness of a thriving retro frock. In other words, it looks anemic. It makes Beulah look like a Greek statue in drag. 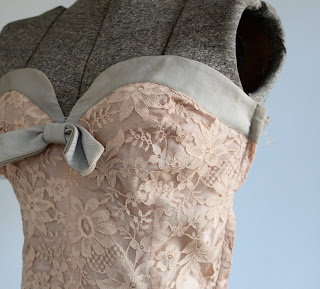 I have to figure out what to feed it to bring back its bloom. How to treat it. How to write about it. How to photograph it so it doesn't look like a dress stuck on doll parts, because on Beulah it looks, just, sad. So this is perhaps the crossroads dress that will finally make me forsake Beulah, in all her flea-bitten rickety wonder, for a more sleek, vanilla-linen-covered dress form that doesn't maw apart at the ribs or crack open at one rear hip panel. A Wolf? A Baumann? Would that I were so lucky. 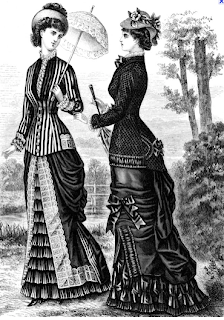 Beulah was built about a hundred years ago and does not entirely resemble so much as confound the contours of a woman's body. She is probably more like the Victorian, bustled, chest-forward, corseted ideal of a body. With a hole in its skin and that smell, like pie. Better, I suppose, than the shoes, which I'm about to de-scent using my secret recipe, gleaned from an old cookbook, actually, written for clueless young brides.