From the family album

Elbert not Ehlro-n (from the dept. of exploding tangents)

Massive, massive, gigantic, megagigundous difference between the Roycrofters and the guy responsible, besides the Martians, for that vast cult known as the sci-ummmologisumissimists. The guy whose name rhymes with, wouldn't you know it, Enron. Hm. Given that I once wrote an exposé for a magzine published by Ralph Lauren's son on EST offshoot the landmarx fourhum (not the real name), and thus nearly got sued by the cult's admin, I hesitate to even say the word scientolomoneybrainwashbarleywaterologiwhich. And yes, I know that one is not the other. But they both have formidable legal teams.
Meanwhile, Elbert Hubbard. Actually there are some similarities between Elbert and the EST guy, to explore a tangent, which I can and will. (That's where that incredibly long tag with the words "tellingest line" comes in). 1) They both had names that started with "E" and had a short first and a long second syllable, though Elbert is a first name, and Ehrsatz (ok, it's Erhard) is a last name. 2) They were both salesmen, though Elbert was a soap salesman, and the EST guy sold used cars in St. Louis. But Elbert Hubbard did good things. Really good things. It wasn't about the money.
I knew Elbert had founded the Roycrofters, that Arts & Crafts colony in East Aurora, maker of the most lovely, lovely books (since he could not find a publisher), the most ornate yet perfect typography and ornament, and lots of seriously honest, lovely stuff.

— died while traveling on the Lusitania in 1915 when it was torpedoed by a German submarine. A very not Arts and Crafts way to go. A Roycrofter's booklet came into the shop from 1916, the strangely titled (until you read it) Message to Garcia. 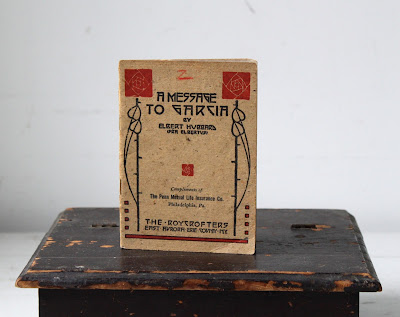 The title gets its name from the fact that there is a man who has to get a message to Garcia, and, well, he does. And saves the day. 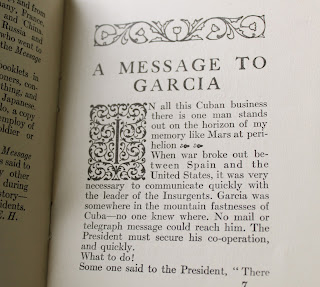 And that's what got me started looking up Elberto. History begs to be messed with in a writer's head, and to me the title sounds like a very modern short story, a Godotian plot, perhaps, where someone has to get a message to someone who may or may not be named Garcia, and perhaps the whole thing takes place in Miami on Calle Ocho, and the protagonist, a very anti antihero, finds himself stepping on toes every time he asked. As in, What, you think we're all named Garcia?


Of course this has nothing to do with Elbert Hubbard or his noble, noble ideals and the lovely little booklet, whose only flaw, really, is a grease penciled "2" on the cover. Who would do that? Certainly not someone who knew anything about Elbert, or loyalty. 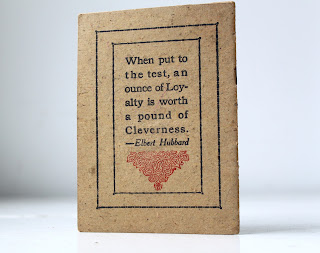 Labels: actors, AND THOSE OF YOU WHO KNOW ME CAN FIND THE TELLINGEST LINE, antique books, collecting, Department of Instastories, history, ideaphoria, inspiration, luncheonettevintage, vintage
Leonia, 1970s
It wasn't just about Mom and the rhododendrons and the tree.

The new dog likes her walks. We head up the road and hang a left, trudge up the hill. Dogs will trudge happily. That is perhaps a key distinction between dogs and humans, one I am trying to learn from.


We always pass the same houses, the same barns, but they never look the same. Not even the grass looks the same from one day to the next.
This is perhaps a key distinction between my mother and myself. She used to talk about how bored, how claustrophobic, how trapped she felt when we lived in Leonia, NJ, a tiny little town filled with old houses and rhododendrons and spreading old elms and maples. There was a specific tree, a sugar maple, on the main street as we walked into town. I remember it as a wonder. She remembered it as "There's that damn tree again." Of course she didn't drive so in a sense she was trapped there, as the other mothers motored by in their Buick wagons. Another story entirely.

Labels: AND THOSE OF YOU WHO KNOW ME CAN FIND THE TELLINGEST LINE, Department of Instastories, dogs, happiness, history, inspiration, olivebridge
Newer Posts Older Posts Home
Subscribe to: Posts (Atom)